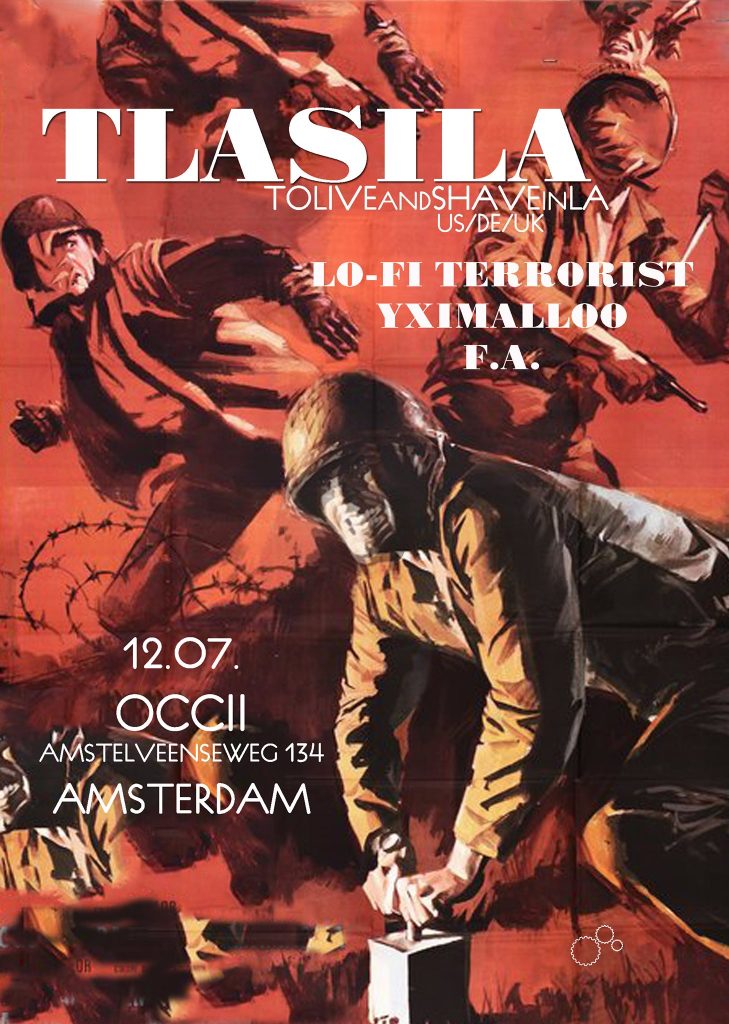 TLASILA return to AMS after Haperende Mens Festival in 2015
– – – – –
TLASILA is comprised of Tom Smith (Peach of Immortality, Pussy Galore) and Rat Bastard (Miami-based producer, INC founder). In 1993 they created the first TLASILA EP, “Spatters of a Royal Sperm,” complete with a video directed by Exploitation pioneer Doris Wishman. “We knew what we wanted to be from the outset,” Smith explained to Spin in 1995. “High and low. (Marcel) Duchamp and (Russ) Meyer. (Marguerite) Duras and (Roberta) Findlay. (Ezra) Pound and (backwoods Pentacostal radio minister Lester) Knox.”

The duo has time and again asserted that “It’s never a good idea to plant a flag … We like what we like. Genre is obsolete.”
At the intersection of harsh noise, musique concrète, punk, spoken word, and anti-fascist sermonizing you begin to pick up the trail they have been blazing for a generation. In their wake, nearly one hundred albums, one thousand EPs, a barrage of reconfigured compositions and improbable mashups.

Recent albums of note: “The Grief That Shrieked to Multiply” (2013), “Apfel – Messe – Fliege,” a 2015 recording with free-jazz pianist Matt Mitchell, and 2018’s “Beyond the Wealth of Associations, the Damp,” a punishing live set featuring Sigtryggur Berg Sigmarsson, Bastard and Smith. 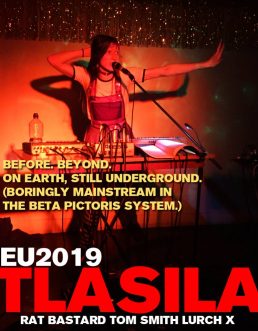 In her own tongue: “The mistress of the macabre, Lurch X, sorceress of the surreal and full-time sugar-manic extraterrestrial amphibian girl is here to transport your psyche to an unknown dimension of sonics so garish and absurd, emotionally excessive and bursting with chromaticity that the very subatomic particles of your being will be changed forever! Armed with her caterwauling voice and an array of other pressure wave weaponry such as guitar, MPC1000, synth and sometimes even drums, Miss X has a mission of psychotropic audio aberration to which she militantly dedicated, as evidenced by her hysterical abstract freakouts in PETRONN SPHENE, BLOODCLAAT ORANGE and GUTTERSNIPE.”

Yximalloo – aka Naofumi Ishimaru – works like a Japanese Jandek without the angst, like the Boredoms minus the bombast. Spiritual kin to early artpunk and especially the LAFMS, he revels in mock-ethnic music and nonsense. Lo-fi, sweet and primitive, he uses ancient drum machines, hand percussion, and electronic droplet noises, sometimes set to melodies gathered from some imaginary South Sea island where the traditional instrument is seemingly an old ’80s synth.

Yximalloo is Naofumi Ishimaru alone, but he drafts a loose ensemble of players, including the core of Shigeo Ootake and Takashi Korgo (who appear on all discs), as collaborator-executors. All of his releases are on his own label, and none have seen a distributor yet (which is why you very rarely find his CDs in stores)….
Handclaps and chanting abound, but Yximalloo has also been painted as a Japanese Half Japanese — Jad Fair himself has collaborated with Ishimaru and draws the covers for every release here (gorgeous dayglo and glow-in-the-dark covers in iridescent plastic cases). Recording since 1973 (!), he still has but one Yximalloo release in the States, last year’s retrospective LP on Old Gold. Most CDs are around 70 minutes and usually contain over 30 tracks. Just listen to a few of the RealAudio samples to get a glimpse into his strange sound-world.-Other Music RE-

Formatory Apparatus is an Amsterdam based home-taping project by Bence Meijer that started out in 2010 out of the ashes of a previous unknown group. The music consists of fully analog, motorik-synth, minimal wave, home-taping and experiment music. Tracks can vary from synth-pop tunes to synthetic atmospheres to non-music or noise depending on the mood and circumstances.

Aside from producing tracks Bence also DJ’s and organizes concerts and exhibitions with the Amsterdam based arts and music foundation Haperende Mens. Furthermore he runs the music blog and record label “Archaic Inventions” dedicated to deviant and forgotten music from the past and the unknown future.

This night he will play a completely new improvisation for OCCII and the home-town as a precursor to his musical debute at the Braille Satellite Festival in Lithuania one week later.