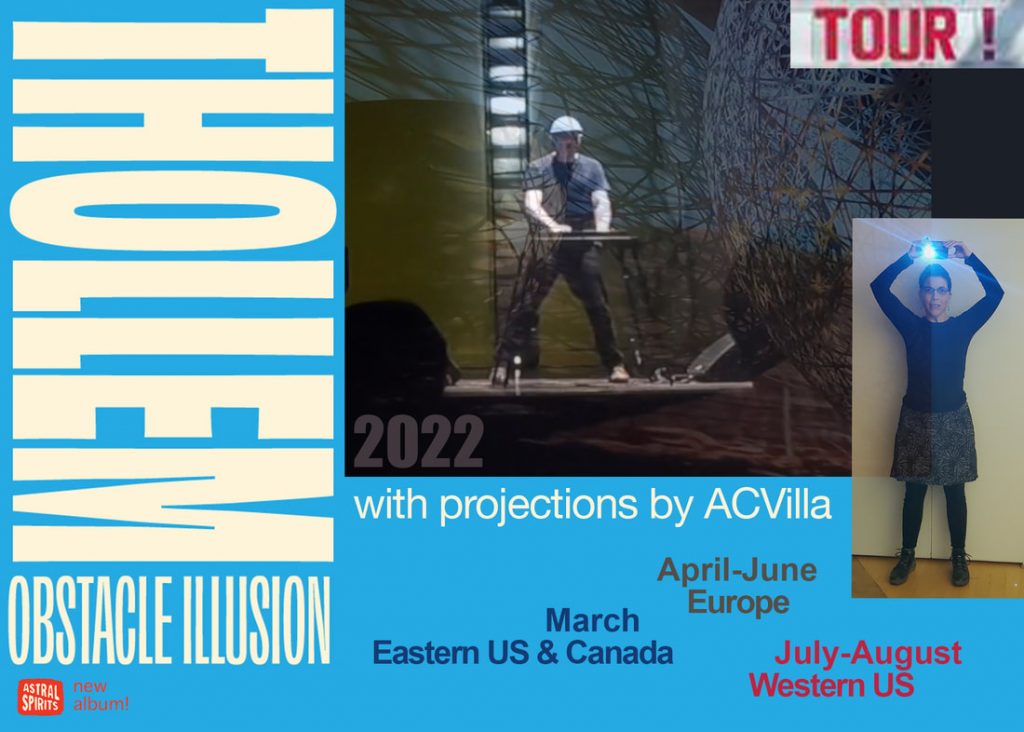 Thollem’s Obstacle Illusion with ACVilla plus duo with Sanem Kalfa

Named after Thollem’s March ’22 release on Astral Spirits Records, ‘Obstacle Illusion‘ is a multimedia experience (with projections by ACVilla) that plays with our personal and collective consciousness through visual and sonic allegories, riddles and re-contextualizations.

Thollem and Sanem Kalfa will meet for the 2nd time on stage in a free exchange of expression based on their respective sonic experiences and myriad influences and inspirations.

Thollem is a perpetually traveling pianist, keyboardist and composer. He’s spent most of his life living on the road throughout North America and Europe. His work is ever-changing, evolving and responding to the times and his experiences, both as a soloist and in collaboration with hundreds of artists across idioms and disciplines.

Sanem Kalfa is a Turkish singer with a distinctive style, mixing jazz, improvisation, and world music into a powerful blend of emotions. After studying cello, she moved from Turkey to the Netherlands to study singing. During her studies she won several awards, including the 1st Prize Shure Montreux Jazz Vocal Competition presided by Quincy Jones. In 2014 she released her debut album “Nehir”. She released her second album “DANCE” as a duo with George Dumitriu in May 2018. Her last album with George Dumitriu and Joachim Badenhorst “Blacksea Songs” was released by El Negocito Records in Jazz 2020.Sanem Kalfa was born in Trabzon, a city on the Black Sea coast of northeast Turkey. Black Sea is the call of green and people from this region are full of humor and deeply dedicated to earth. Emotional swings go hand in hand with the waves of the Black Sea. Sanem is currently based in Amsterdam, performing worldwide and pleased to teach music to students (from any age and background). Her main aim is to be a part of an experience that will help enrich life by music.
sanemkalfa.com

Since 2008, ACVilla has lived as a peripatetic photographer, videographer and visual artist. She focuses her camera on the nuances that define the character of the fleeting yet eternal present moment as well as the dynamics of the world at large. Her work is shown throughout the US and Europe in DIY spaces, museums, galleries, schools and universities. ACVilla is “the kind of fiercely independent artist the world needs more of.” (LiveEyeTV)
acvillavisions.com/