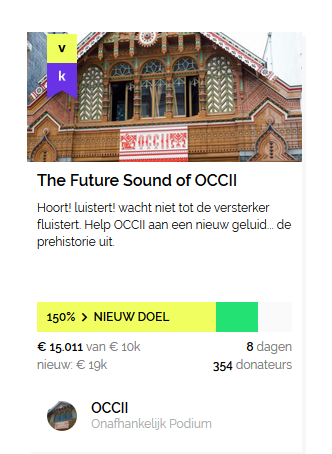 For OCCII’s crowdfunding campaign we are hosting a benefit at De Ruimte. Come listen to music by good friends of both OCCII and De Ruimte.

For over 25 years, OCCII has been a rich place for concerts and other culturally significant events and activities. In the iconic building on the Amstelveenseweg in Amsterdam, many people have witnessed amazing musical experiences. We want to keep bringing the groundbreaking sounds we have been bringing everyone who loves OCCII and who loves music for all these years. That’s why we’re investing in new sound equipment. We have already reached our goal to be able to replace our overdue amplifiers, but we could use much more! We are currently continuing to raise money to also be able to replace our current monitor speakers. Read more about the campaign here: https://www.voordekunst.nl/projecten/8899-the-future-sound-of-occii

Pau Sola Masafrets and George Hadow have been working together since late 2017. The project began as a means of bringing to fruition what both had prior been working on independently – south Indian rhythmical techniques.
Ranging vastly from heavy searing fissure to the most delicate, the duo works very much from a rhythmical standpoint; a twisting, turning discombobulation to a breezing zephyr and back again.

ORPHAX
Amsterdam based musician and trained drummer Sietse van Erve (Orphax) was introduced to electronic music in the early nineties. After playing around with tracker software for a couple of years, he eventually recorded his first more serious attempts of music with beats and melodies in 1998, though soon lost interest in both these.
He started researching new sounds and new ways of working – always with an organic touch, often incorporating sounds that would be regarded by others as errors or mistakes. Considering life isn’t without errors either. During this search, he found his way into drone and microtonal music. As a result in his most recent work, time and spatiality become more important factors. The goal of the music is for the listener to lose the sense of time and place.
Live this is combined with room for improvisation. This way of working results often in an organic form of drone and minimal music.

He has released over 50 releases, as Download, CD-R, Tapes, CD’s and Vinyl, on various labels, as well as self-released online since he started working on music. This includes collaborations with Machinefabriek and Martijn Comes. Furthermore, he contributed to many remix projects including work for Kenneth Kirschner, Martijn Comes, TVO and Chris Dooks among others.
In the past, he has shared the stage with various musicians including Martijn Comes, Jos Smolders, Frans de Waard (Modelbau), Zeno van den Broek, TVO, BJ Nilsen, Philip Jeck and Yann Novak.

Doors open 20:00, first act starts at 21:00.
Entrance will be donation based, but recommended is €5 or more. Give as much as you want for OCCII!

After the two main acts, DJ Scratchman will provide you with some sounds (mellow, dissonant or somewhere in between) to get you through the night.
Scratchman, also known as Luka Schuurman, is both a bartender at De Ruimte and a volunteer at OCCII. As a freelance graphic designer, he even designed the beautiful crowdfunding flyer you’ve been seeing all around town.