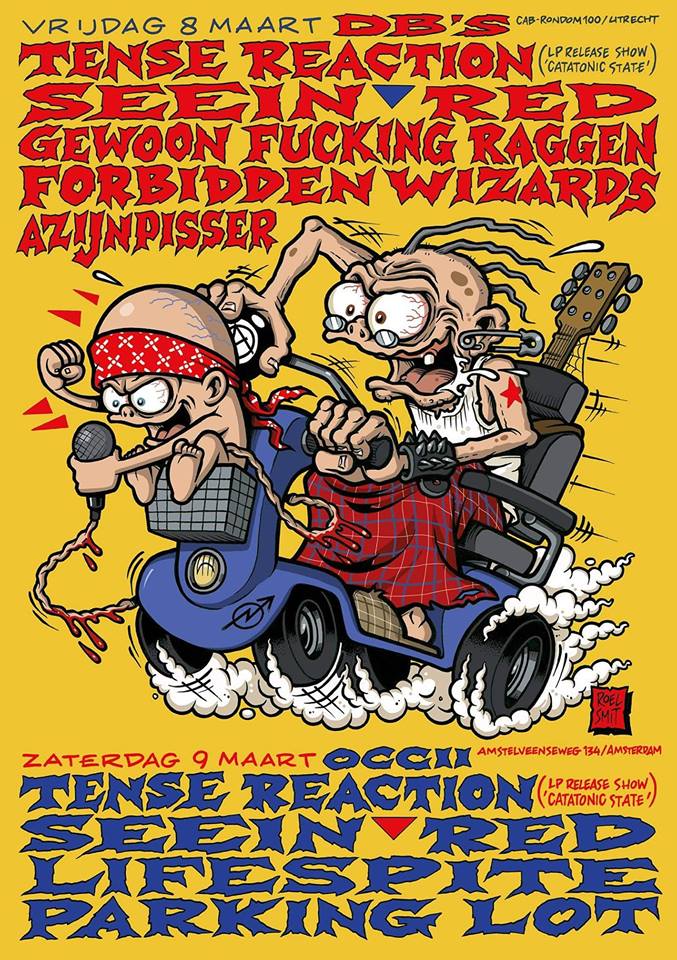 SEEIN’RED (reunion show)
Legendary punks SEEIN’RED reunite after a 7 year hiatus! They had to quit in 2012 due to physical problems and played their final show in OCCII(Amsterdam).
It must have been around 1988 when LÄRM called its quits and Paul,Olav, Jos and Menno decided to call their new band SEEIN’RED. Menno quit the band for several good reasons, Burt joined on bass and in that early lineup the band recorded the first 4 songs. Soon after that Jos got back on bass and SEEIN’RED continued as a trio: Paul, Olav and Jos. This lineup never changed.
Musically, SEEIN’RED was more or less a counter-reaction on LÄRM. At the time the band was sick and tired of just playing short and fast hardcore songs and wanted to go in a somewhat other direction.The initial thought of SEEIN’RED was an attempt to play a different style of punk-hardcore. But looking back at it, the band admits that they never could play this sort of music really well. It became clear that they should stick to what they were good at. SEEIN’RED drifted back to the fast and short style of raging punk thrash. Bands like DROP DEAD and STACK blew them away and had a big impact. That uncompromising style of punk was more the SEEIN’RED “cup of tea” and a far better way to express the frustration, boredom, oppression and anger!
SEEIN’RED released a ton of material on albums, ep’s, splits, compilations, etc. They toured Europe, U.S.A. and Japan and played numerous shows during their career.