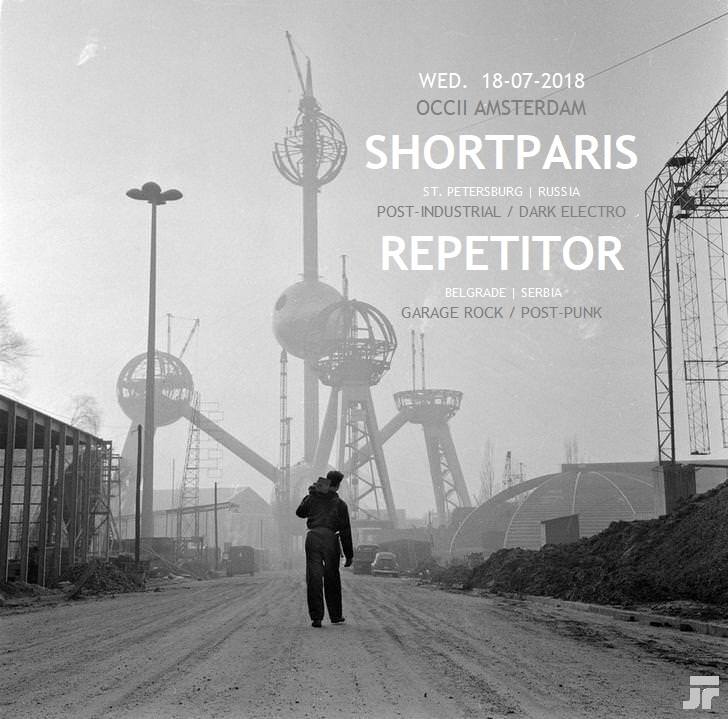 Catharsis. Salvation. Shortparis.
This audacious dance groove, fusing dark electronica, post-punk, noise and chanson, is irresistibly catchy.
Anchored in the decadent aesthetic of the labyrinths of the Russian soul, with French or even English lyrics,
it erases the line between concert and theatre. The audience includes Ian Curtis, Siouxsie Sioux, Blixa Bargeld, Peter Murphy and Nick Cave. Ian is dancing in a corner by himself, Siouxsie is pouring red wine over the front rows, Blixa and Nick are doing the tango, Peter is booking tickets to Russia.

”Amazing Russian band who combine a post industrial electronic
throb with a haunting falsetto vocal, guitars, Belgian new beat and
soundtrack into a compelling and brilliant whole. Their music is
full of groundbreaking action and intensity and a dark and melancholic
danger, they are the post darkwave, they have the songs and the
charisma to fill the Depeche Mode stadium circuit, they sound like the
21st century now, they make electronics sound warm and human and full
of vim and fuck and the singer does these wild sex dances that part
hypnotise the audience and part terrify them. In short Shortparis are
the band of the moment.

This is a true death disco – a post-industrial dark and thrilling
ride on the dark side that you can dance to. A thrilling combination
of electronics and post-punk deconstruction with operatic vocals”.
__THEY ARE 2018. __THEY ARE THE NOW_. JOHN ROBB, LOUDERTHANWAR.

Repetitor is a garage rock/post-punk trio from Belgrade, Serbia. They are, without doubt, one of the most exciting live bands in Europe. Repetitor faithfully carved their signature sound, a blend of heavy rock’n’roll, post-punk and everything in between. The listener is thundered by a high-voltage wall of sound, bursts of rage, fear, violence, pain and anxiety. On one side, we have Boris psychotically grinding his guitar strings and shredding chords with a punk attitude, soon to twist them into hurricane heavy riffs. On other side, there’s playful and bouncy Ana-Marija, fused with her bass guitar working on cooking a post-punk balm. All of this is glued together by the untamable beast on drums, Milena, bittery drumming away like if it’s the end of time. All three perform as one – all for one and one for all.

In the noisy range of their guitar-based rock echoes The Stooges, Nirvana, Sonic Youth, Dead Moon, Suicide, Bikini Kill, Swans, and more – however, Repetitor are so genuine and unique that you can describe their music just by saying »Repetitor«. Together with Savages, Metz, Thee Oh Sess, Girl Band, Future of the Left, A Place To Bury Strangers, Fat White Family, they are plunging on the transversal of the most dangerous rock bands of the moment.

»They make you fall in love with guitar rock all over again and are arguably the best guitar band on the planet right now. They are the 21st Century Nirvana who have come to save rock.« (John Robb, Louder Than War)

»Easily the most exciting band I saw during the whole festival were Serbia’s Repetitior, a noise-core trio in the METZ mould, only rawer, louder and five times as furious… « (Marc Burrows, Drowned In Sound)

»It’s chaotic, and they are angry – not in a faking it for the music kind of way, they are really fucking angry.« (Lauren Down, The Line of Best Fit)

»Looking ahead and taking stock, Repetitor have made a timeless rock record, timeless like Unknown Pleasures, or Underwater Moonlight, or Kick out the Jams, or Fresh Fruit…« (Richard J. Foster, Louder Than War)