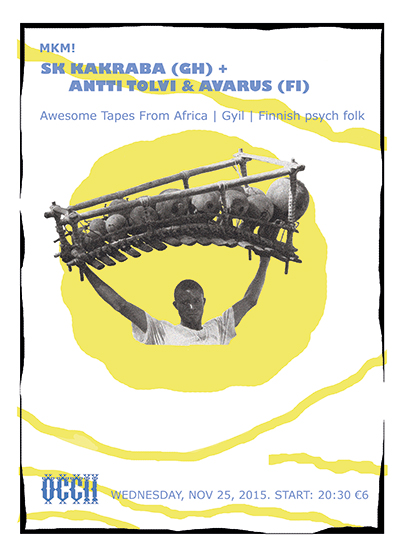 SK KAKRABA (Ghana, Awesome Tapes From Africa)
SK Kakraba is master of the gyil, Ghanaian xylophone made of 14 wooden slats strung across calabash gourd resonators. The buzzy rattle emitted with each note comes from the silk walls of spiders’ egg sacs stretched across holes in the gourds, called paapieye in Lobi language. The gyil’s earthy sound can be heard in parts of Upper West and Northern Regions of Ghana, as well as Côte d’Ivoire, Burkina Faso and beyond, where it goes by other names.

The characteristic buzzing timbre might sound odd to foreign ears. But this distortion is just one of the beautifying sensibilities crucial to SK’s gyil music, which he learned as a child from elders in his Lobi community in the far northwest reaches of Ghana.
Although the gyil is sometimes played in pairs and with drum and bell, SK lives in Los Angeles these days and plays alone quite often. 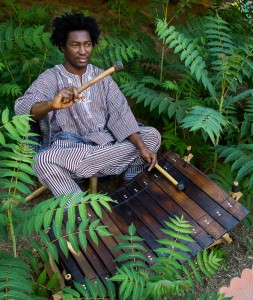 “Guun” is a funeral song to dance to, a final send-off for the recently departed. It also closes out SK Kakraba’s forthcoming album Songs of Paapieye, the first non-reissue to be released on Awesome Tapes From Africa. Kakraba, who grew up in the Northern Region of Ghana before eventually relocating to L.A., is a master of the gyil—a wooden 14-bar xylophone similar to the balafon, except buzzier. That buzz comes from silk spider egg casings patched over holes in the gyil’s resonating gourds. The effect is somewhere between drone and a more stripped-down, rhythmically intricate Konono No 1.

“Guun” feels like a tangle of connected dots, like throngs of notes thickening and thinning in recurring permutations. Kakraba’s polyrhythms are genius, and a single loping bassline anchors them, alternating with more exposed, almost scat-like improvisations. There’s a fluidity and flexibility of gesture here that’s reminiscent of jazz, too, even though the gyil far predates that. In some sense then, “Guun” is a bridge, not just between musical elements but also, as it was intended, between this life and the next.

AVARUS has been the creator and ringleader of beer trance for close to 15 years now. Several chaotic international tours in continental Europe, UK and USA have crystallized their vision to become the shiny electro-acoustic beast of today. In the halcyon days of freak folk, the group could at times be the size of up to 15 people. However, the core unit has been a tighter and a bit more focused entity for several years now. Today, they effortlessly conjure up the playful boogie of Curiosum-era Cluster. Their discography includes round 20 releases and they have shared the stage with for example Acid Mothers Temple, Sir Richard Bishop, JOMF, Bardo Pond and countless others. 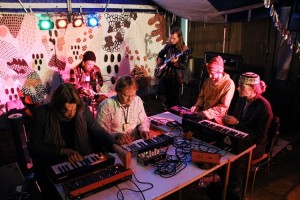 “Aware or not, this near-anonymous septet follow a lineage that seems to ricochet from Philemon Arthur and the Dung to Terry Riley’s time-lag to Godz to planet Earth’s inner chakra. Avarus’ vicissitude consists of liquid rhythms filling the cracks between surface clatter and scrawl, flowing along the brink of pre-articulated titanic constructions. In short, Avarus are a heavy trip.”

“This is psychedelic in the same way early Faust was, in that it teases the brain, but certainly ain’t the Dead, unless you took all of their tuning-up exercises and layered them atop each other. This is free music, almost as if the sounds had minds of their own and decided to get their groove on. But their groove isn’t one recognizable to us humans. Not that it matters.”

“Occasionally Avarus take a detour from the ongoing maelstrom to indulge in a brief mantric campfire rhythm or goofy synth interjection, but then it’s quickly back into the fray with little concern for continuity or structure. Instead, Avarus seem to take an almost child-like interest in the imaginative possibilities of pure sound”

Antti Tolvi is a father, composer, performer, wanna be self-sufficiency , taiji teacher and more. Born in 1977. Lived first 19 year in farm west coast of Finland. Then moved to City (Turku) where little by little world started to open. Found first wind instrument, didgeridoo. Then free jazz (saxophone in Rauhan Orkesteri 2001->) came to picture, but at the same time Indian classical music started to sound very interesting. Soon came trip to Varanasi and studying Indian classical music. Next was nature and taiji studies. After 10 years in Turku, moving back to countryside. Slowly from wild / chaos / free to more solo and minimalism world. Zen meditation came in. Children. Everything starts to come together. After 10 years back in countryside, everything starts from beginning. Didgeridoos sounds again great and interesting. Schlagers sounds better than ever, birds, wind, silence, harmony.. 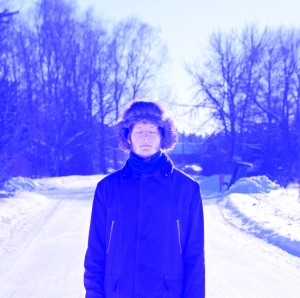