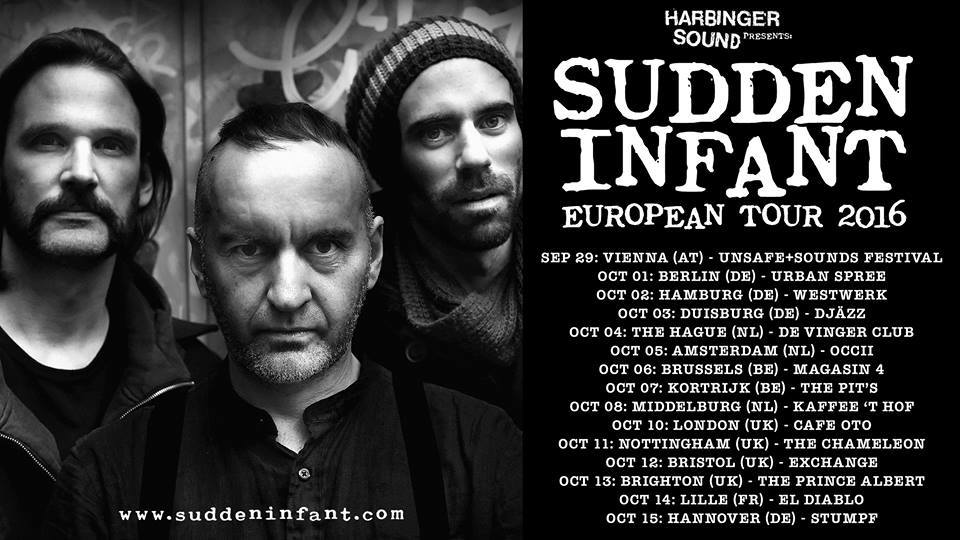 After 25 years of extensive solo works and collaborations, Sudden Infant is now operating as a three-piece band with Joke Lanz, Christian Weber and Alexandre Babel.
The international acclaimed Noise project has transformed into a Dada-Punk-Industrial unit produced by Roli Mosimann (ex Swans drummer). In the past Sudden Infant toured with Sleaford Mods and opened for Wolf Eyes, Ben Frost, Merzbow, Derek Bailey, Joan La Barbara, Thurston Moore, Jim O’Rourke and many others.
Innumerable releases on some of the most prominent record labels in the underground scene: RRR, Harbinger Sound, Artware, Voodoo Rhythm, Blossoming Noise, Tochnit Aleph, Some Bizarre a.o. Festivals and tours in USA, Japan, Israel, Taiwan, Hong Kong, South Africa and all over Europe.

“Sudden Infant go all the way. Nothing is held back.”
– Keith Moline / The Wire

“Fucking awesome band! I was lucky enough to witness their set live at 100 Club. Killer!”
– Steve Crittall / The Godfathers