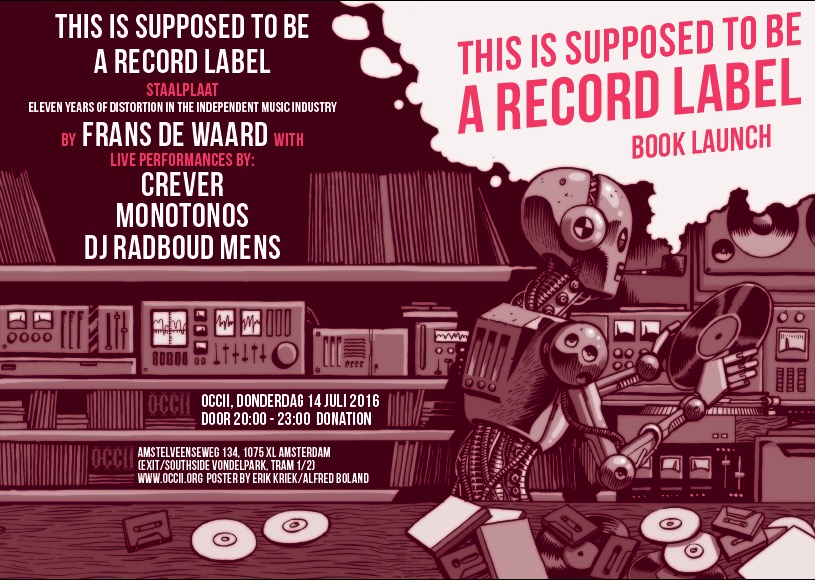 This Is Supposed To Be A Book Launch:

THIS IS SUPPOSED TO BE A RECORD LABEL (STAALPLAAT: ELEVEN YEARS OF DISTORTION IN THE INDEPENDENT MUSIC INDUSTRY) by Frans De Waard
w/ CREVER + MONOTONOS + DJ RADBOUD MENS

In 1984 Frans de Waard started his own band, Kapotte Muziek, and his own cassette label, Korm Plastics. A few years later, in 1992, he was asked to work for Staalplaat, then one of the biggest independent labels for experimental and electronic music. Staalplaat was the home for bands like Muslimgauze, :zoviet*france:, Rapoon, O Yuki Conjugate as well as Jaap Blonk, Normally Invisible and Kingdom Scum. With an average of three new releases every month, Staalplaat remained a major player for the next eleven years. Frans was hired to set-up a database and to sell and buy new music, but over the years also assumed a role as (unofficial) business director and A&R man, and came to be regarded as the head honcho. In 2003 he’d had enough and decided to quit.

This book tells his story about those eleven years, the many high and as many lows of working for a small independent record label, which also functioned as a shop, mail order, radio programme, news outlet, and concert organiser. It’s about embarrassing confrontations with musicians, labels, distributors, and the endless spending on the most unique packaging CD-Land ever saw.

It includes various appendices, such as an interview with Staalplaat founder Geert-Jan Hobijn, a transcript of a radio interview with Muslimgauze, a 1980’s account of Staalplaat’s activities, and a discography, among others.

There are no images of artists or album covers; instead you can feast your eyes on some never-before-seen, behind-the scenes photos taken in the office, shop and warehouse.

This book will appeal to everyone with an interest in the experimental music scene, and anyone else who wants to read a crazy, funny and sad story about a small struggling record label. Knowledge of the music is not required, but you will surely be inclined to look it up while or after reading this. Anyone who is interested in a manual of how (not) to run your record label might want to take notes.

THIS IS SUPPOSED TO BE A RECORD LABEL – Frans De Waard
O/Ref: STAALPLAAT: ELEVEN YEARS OF DISTORTION

This is Supposed to Be a Record Label

Frans de Waard (1965) has been producing music since 1984. First as Kapotte Muziek, but throughout the years, he also worked as Beequeen (with Freek Kinkelaar), Goem (with Roel Meelkop & Peter Duimelinks, both of whom are also a member of Kapotte Muziek these days), Zebra (with Roel Meelkop) and such solo projects as Freiband, Shifts as well as his own name. He has worked for Staalplaat (1992-2003) and since 1986 as a reviewer for his own publication Vital, now only Vital Weekly, an online music magazine, which has been the online source for underground music since 1995.

Crever is a Dutch industrial noise project, founded by JH.B at the end of 2011. After the debut release in 2012, Crever collaborates frequently with Hekte Zaren (PL) and several other (inter)national artists to perform on cultural events and live concerts.

RADBOUD MENS
Radboud Mens is a sound-artist, composer and sound designer. He started creating noise-machines in 1988. In the early 90s he attached contact mics to dog’s brushes that he used to destroy vinyl records by scratch-playing them, boosting the signal through broken cassette-decks and recording the results. He also made rhythmic-noise using a broken turntable. In 1994 these experiments were released as a two CD set by the British label i-Records under the project names Hyware and Technoise. To achieve the full effect, listeners had to mix the two discs together themselves.
From 1997 on he also released music under his own name, music that is more minimal and conceptual. For his CD Cl;ck, which was made in 1997/1998, but released two years later, he used digital clicks and errors he collected while cleaning up digital recordings during his stint as a sound engineer at the Centre Of Electronic Music in Amsterdam. Pulse, his next CD release, is based on a DSP function called ‘convolution’. He worked on the vocabulary for this CD for two years.

He has a radio show called 230 Volt on the Concertzender in the Netherlands and alternates as the producer of the Staalplaat radio shows on dfm.nu
http://www.radboudmens.com/