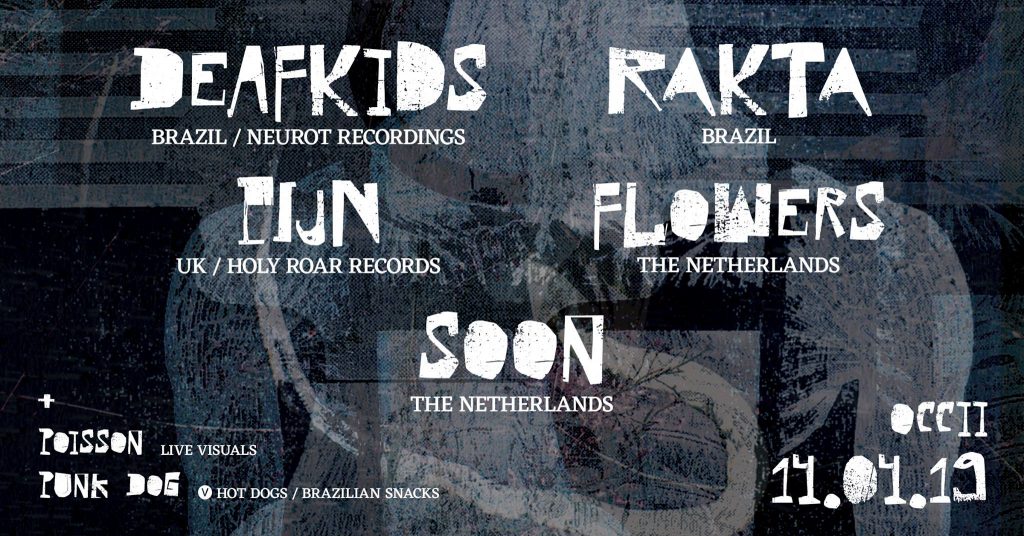 Formed in 2010 in the industrial city of Volta Redonda/Rio de Janeiro, Deaf Kids’ first iteration was a solo idea by Douglas, delivering a fuzz-soaked blend of crust/d-beat and the many other musical offerings he had to offer. Soon, a live-performing unit was assembled, and a few months after the lineup was stabilized, with Mariano on drums and Marcelo on bass. Seven years, many gigs across Brazil, two European tours, eight releases – more than 200 shows after, Deaf Kids remains steadfast onto the multiple paths that lead into the self-questioning and sonic deprogramming of minds.
https://deafkidspunx.bandcamp.com

Straight from the depths of São Paulo, Brazil, Rakta is a band too wild to be caged inside familiar rock labels. In fact, very little is familiar, or comfortable in Rakta’s music and general stance. On the road since 2012, the group, formed only by women, had as an initial inspiration the musical freedom and policy of the 70s/80s anarchist and post-punk scene, especially towards the “antiphilosophies” from the British collective Crass.
https://rakta.bandcamp.com

FLOWERS brings stoner rock back to its embryonic state, confidently pushing its primeval characteristics towards unmapped places. Within the limited instrumentation the dynamics are stretched to the max: from doom-laden noise onslaughts to gloomy, forlorn minimalism. Though poised and stylish, the emotional release unfolding is unfiltered, uncompromising and hard-hitting. This band understands that, in order to keep raising the stakes, restraint and suspense are just as useful as crude juggernaut-like power.
https://flowersofficial.bandcamp.com

↯ SOON (NL)
/drone/experimental/
What happens when an Alien meets a Sunbeam? Noise guitarista Liú Mottes and drummer Jochem van Tol join their forces in SOON.
They played every hour at Sexyland Lowlands 2018, which sparked a new musical explosion. Their music moves between spinning and dazzling sound eruptions to piercing but elegant pulses. With a hint to cinematic sound scores they make you both listen and move. Inspired by the likes of Dick Raaijmakers, Sonic Youth and Blade Runner.
https://soundcloud.com/user-316927593