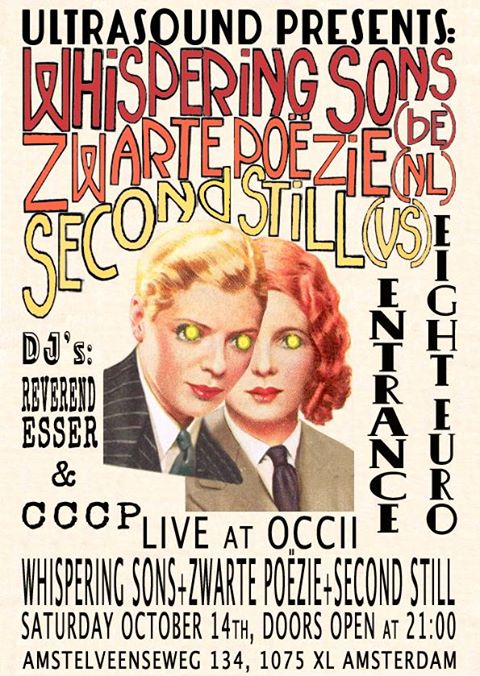 Whispering Sons is a Belgian post-punk band formed in 2013. Their dark sound breathes desperation and nervosity, which translates into an ominous atmosphere. Their first EP ‘Endless Party’ was released in December 2015 on Wool-E Tapes and was reissued on vinyl in March 2016 through Minimal Maximal. On November 25, the band released a 2-track 7″ on Weyrd Son Records.

Zwarte Poëzie has shared the stage with acclaimed Dutch alternative acts Spinvis and VanKatoen, and abroad they opened for Ray Wilson & Stiltskin. The band is well adopted in the Dutch wave/goth-scene, regularly playing at gothparties like onderSTROOM, Manifest, Nouveau Noir and Zonsverduistering.

Second Still is a three piece post-punk/coldwave band from Los Angeles, CA. Combining the definitive sounds of French coldwave with the unconventional time signatures of No Wave, then layering that hybrid with hauntingly beautiful vocal melodies, Second Still crafts a sound soaked in nostalgia but also one that marches onwards towards the future. Infectious bass lines infiltrate your body and attack your senses. Guitar phrases glide in undulating melodic waves that peak into moments of formidable delay feedback. Heavyweight drum machine beats feel like punches to the gut.

Combing the 80s underground for only the best of influences like Xmal Deutschland, Garlands-era Cocteau Twin, Asylum Party, and Opera De Nuit, Second Still invokes the classic wave of La Vague Froide as their sound washes over you. Smooth running water slowly freezes as the sun’s reflection is blocked by a sound that is decidedly Second Still’s own unique imprint.”