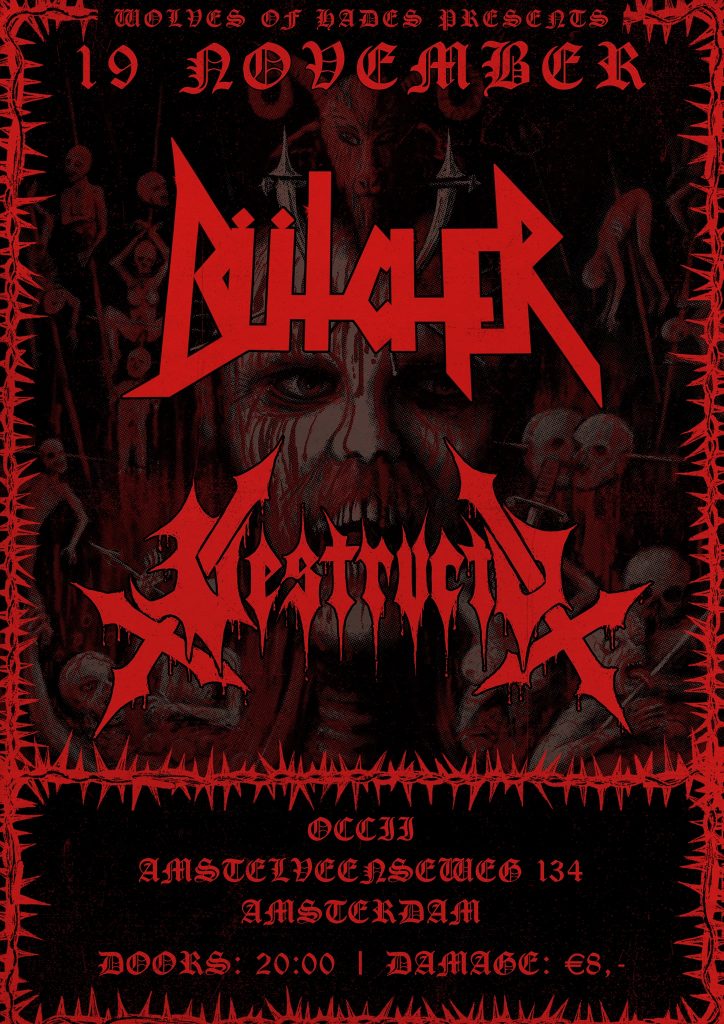 NOTE: THIS SHOW WILL BE POSTPONED TILL EARLY 2022 – WHEN WE HAVE A NEW DATE ONLINE TICKET SALE WILL BE OPEN AGAIN!

– BÜTCHER (Speed/Heavy/Black Metal) –
Analog, heavy metal forged on the anvil of Speed Metal Steele! Pure 80’s speed metal assault from maniacs to maniacs into Agent Steel, Celtic Frost, Nifelheim, Venom, Exciter, Darkthrone, Manowar, Deströyer 666, Slayer, and the likes. After killing the audiences in festivals like Roadburn, Bloodshed, Muskelrock, Eindhoven Metal Meeting & Obscene Extreme, BÜTCHER spread like fire
among the underground Die-Hards. Currently promoting the sophomore album “666 Goats Carry My Chariot” (2020), considered by many as the best heavy metal release of that year.
“Forever in Service to the Godz of Steele!”

– DESTRUCTO (Black/Thrash/Speedpunk) –
The sound, attitude, and execution of DESTRUCTO is similar to the band’s moniker: destructive, merciless, and total fukk-off-driven! As insanity, blasphemy, narcotics, and intoxication all played their part in inspiring Destructo’s debauchery, the power-trio amplifies those noble influences during their live performances that are best described as a wild fucking ride, even for those prepared to get on in the first place.
“This is the Devil’s Rock’n’Roll!”

BÜTCHER, DESTRUCTO
Bookings are closed for this event. 50 tickets will be sold at the door
Posted in Hardcore/Punk, Metal, Rock