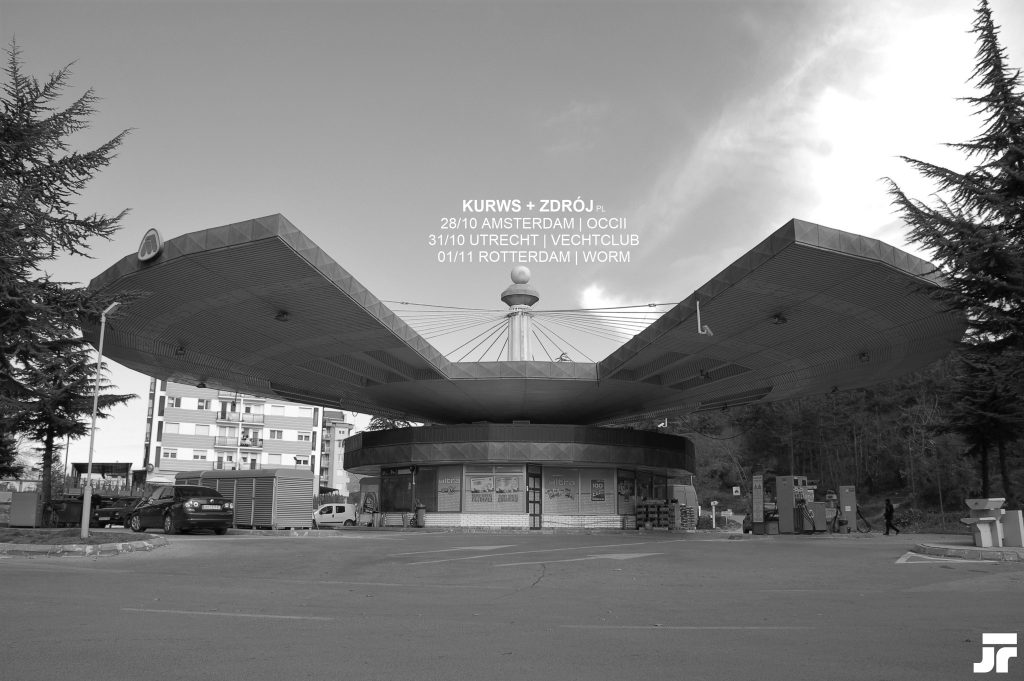 KURWS
They have been playing constantly for fourteen years, and they have given several hundred concerts in Europe and Asia. They act as an open workshop, where improvisations intermingle with compositions. By means of repetitions, recombinations, variations and contrasts, they play with remembering and expectations. Post punk, krautrock, rock in opposition, funk, no wave – ways of playing, motives, riffs, which we heard more than once here, are dissected from their original environments and used in a new way.
In April 2022, their fourth album “Powięź / Fascia” was released on CD by Gusstaff Records. The cassette version is coming out by Korobushka Records, and the vinyl is produced in cooperation with labels from Germany/Holland (Red Wig), France (Dur et Deux), and Czech Republic (Korobushka).
Dawid A. Bargenda – drums, Kuba Majchrzak – bass & Hubert Kostkiewicz – guitar.

ZDRÓJ
Polish/Dutch duo Zdrój performs noise-punk improvisations with a free-spirited, mischievous disposition. One can never be sure what they walked into when stepping into one of their gigs, but the odds are it’s going to be short, noisy, danceable – all in a ‘play-before-you-think’ manner. The band’s self-titled debut – released on MC by Syf Records and soon to be released on LP by Fonoradar Records – can be considered a snapshot of the infectious chemistry between founders Jakub Zasada and Sebastiaan Janssen. The two met in the tight-knit Wroclaw-based music collective CRK Salka, which in addition to Kurws also includes bands such as Atol Atol Atol, Przepych and Ukryte Zalety Systemu.

Poster: the incredible ‘Biljanini Izvori’ (‘Biljana’s sources’) Makpetrol-gas station, in a roundabout exiting Ohrid, Macedonia and named after the famous nearby springs on the Ohrid lake. The station, opened on 7 April, 1971, was designed by architect Gjorgji Golev and celebrated its 50th anniversary this year.
KURWS, ZDRÓJ