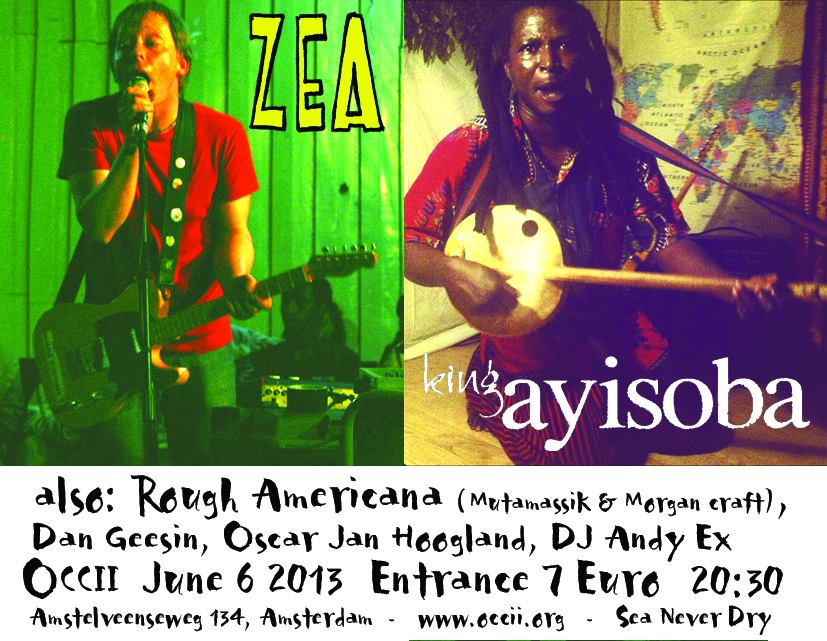 King Ayisoba (Ghana)
This is the traditional kologo music from the Upper East Region of Ghana brought with the energy and flavor of the twenty first century. King Ayisoba sings in Fra Fra, Twi and in English and is a number one star in Ghana who won many prices for best pop song and best traditional song at the same time! There is a whole new scene now starting after King Ayisoba introduced the super catchy kologo beats to the bigger audiences in Ghana and abroad. The kologo is a two string guitar with a calabash gourd resonator, it is rhythmic and melodic at the same time.Traditionaly kologo performances occur at local pito bars, weddings, funerals, festivals or spontaneous jams on the street. Today we will see the force and spirit here, around the corner; learn wise lessons and dig up the future.
https://www.facebook.com/ayisoba.king

Zea + special guest Oscar Jan Hoogland
Zea performances are always a complete blast. He deploys guitar and sampler for an almighty bout of crazily high energy songs. Urgent lyrics over guitar, roughshod beats and grimy bass lines. Joyfully obstinate, wonderfully bonkers! This evening Oscar Jan Hoogland will join Zea on piano.
“It’s incredibly bonkers, that’s for sure, but it’s so bloody energetic, so bull headed and so schizophrenic in its approach to crafting a tune that you simply can’t fail to be impressed by it…The results are astonishing.” Incendiary Magazine
http://www.zea.dds.nl/

Dan Geesin
Dan Geesin graduated from Ateliers Amsterdam in 1996 exploring narrative structures in his short films, music and drawing. In 1998 he completed his first clearly narrative film Sheep Eat Grass and shortly after released the CD Cars, Bikes, Walking. This has been followed by a consistently diverse production of films, music and drawings over the last 17 years. Geesin has produced over 20 short films, 6 music publications and has shown his work in many museums and film festivals including Tate Modern, Moma New York, Centraal Museum Utrecht, Cannes International Film Festival, Berlinale and Edinburgh International Film Festival.
http://www.geesin.nl/

Rough Americana
R.A. ” is dedicated to a new, urgent, improvisational & functional music existing wholly in the 21st ct while embracing all that has come before (umpth to 1st generational). Craft’s ‘AfroAmerican’-Viking and Mutamassik’s Italicized-Egyptian roots draw bridges between MEMPHIS, USA and MEMPHIS, AFRICA……..picking up frequencies from Unseen Forces. Raw, visceral, blazing new trails in sound….stay open to receive messages. This is the new hard-core grit-prov that brings fire to electronic music. nicca metal.” MUSIC TO INCITE/INSIGHT
http://www.roughamericana.com/