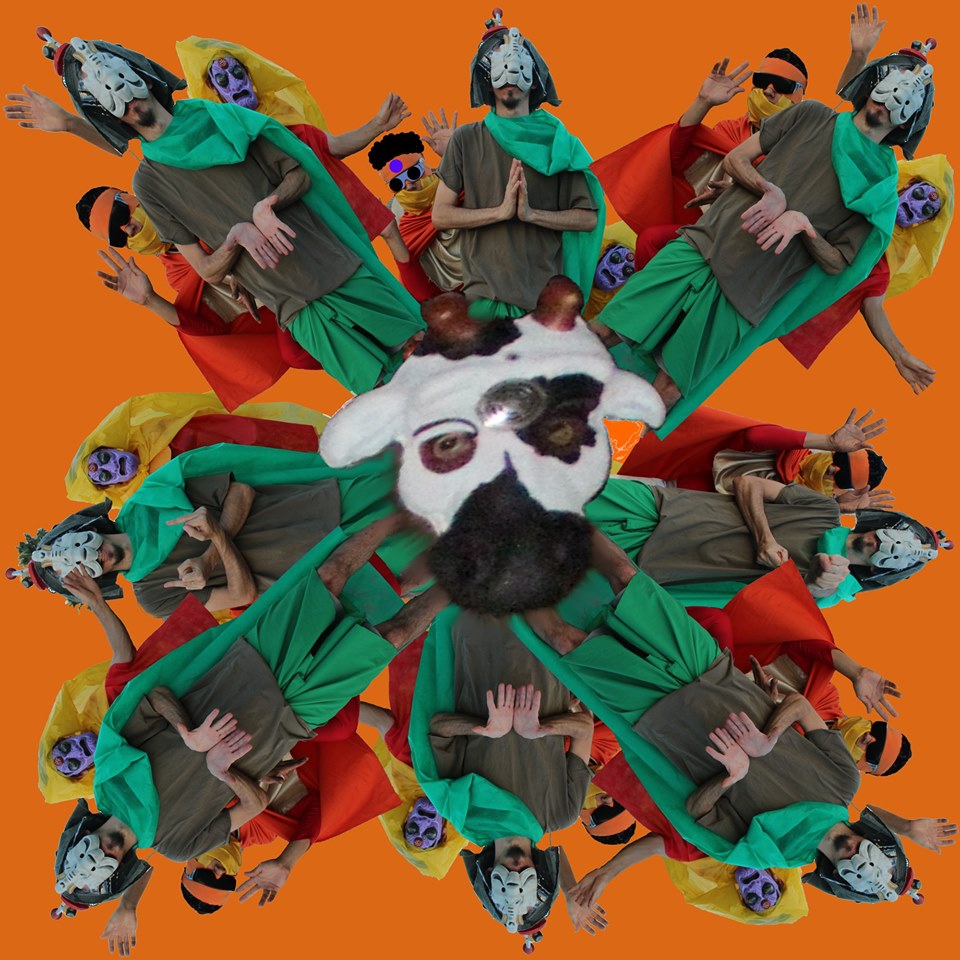 LOS SIQUICOS LITORALEÑOS (AR, Hive Mind, Sham Palace, Annihaya Records, Artetetra, Discrepant)
psych cumbia/rock
Los Siquicos Litoraleños (The psychics of el Litoral) is an Argentinian collective originally from Curuzù Cuatiá: a city of northeast Argentina in Corrientes, an area known (not by chance) el Litoral, whose inhabitants are known as Litoraleños.
From this tropical and torrid land (from 47°F to 90°F, Wind E at 19 km/ h, 70% Humidity ), Los Siquicos Litoraleños developed their unique language, slowly building their own aesthetic in the shape of a surreal mythology and vivid mind-bending folklore.

LISTEN HERE: Coming on like the bastard spawn of Os Mutantes and the Butthole Surfers….

“Los Siquicos Litoraleños bloomed into a sumptuous psychedelic tropicalia band and laid experimental melody eggs in my ears. It’s going to make it really hard to concentrate at dinner.”

“These guys are wonky enough to make The Meridian Brothers look like The Everly Brothers – my advice is to get to know them straight away.”

(Spool’s Out / The Quietus)

..”My soundtrack for crawling thru DC gridlock. On rotation with Bohren and John Zorn. 🎷💀”…

…”meanwhile, somewhere deep underground outside the city, at the contentious border of music and madness”….

NNA is pleased to present GRID, the debut recording from the new trio of Matt Nelson (Battle Trance) on saxophone, Tim Dahl (Child Abuse) on bass, and Nick Podgurski (New Firmament; Feast of the Epiphany) on drums. Despite the trio formation and the individual players’ backgrounds with jazz, the GRID sound takes the plunge toward the darker, heavier, and more psychedelic realms of improvised music. While undoubtedly harnessing the clamorous spirit of free jazz, the trio ventures beyond its acoustic borders, cleverly implementing electronic processing as well as dirge-like tempos that draw upon the slow-burning qualities of Doom and Sludge for inspiration.

The four pieces that make up the album cover plenty of sonic territory and are ripe with expressive gesture, but are unified by the resulting singularity of atmosphere they conjure. Dahl’s extra-heavy bass guitar often marinates in the lower registers, creating a thick undergrowth of growling low end frequencies that anchor the pieces in a doom-like ambiance. Sliding up and down the fret from note to note creates a swaying imbalance that only amplifies the queasy, slow-motion tempos. Nelson’s saxophone, in conjunction with electronic effects processing, unleashes a multitude of refreshingly twisted new sounds, dynamics, and textures from the horn. Overdriven feedback is used to add a deeply fried sustain to the notes, giving them a Hendrix-like soulfulness and urgency. Squeals and squelches occasionally emerge from the web of filtering, reminding the listener that they are in fact hearing saxophone, not guitar. Podgurski’s loose, collapsing drumming style fills the nooks and crevices left behind by Dahl and Nelson’s destructive dissonance, stirring the pot and propelling the music forward. His painterly attack hits in all the right places, reinforcing tempos but also dancing around them, while adding an acoustic juxtaposition that gives dimension to each piece.

Upon listening, there’s no denying that these musicians are deeply rooted in the craft of improvisation – they bring not only experience, but a high level of understanding to their work as well. What makes GRID unique however, is their ability to play with dirtier, noisier, and heavier textures, but with the sensitivity of a seasoned improviser. There is an undeniable physicality to GRID’s sound, as all of the sounds are related to the actual touch of the instrument. Although electronics are utilized, they embellish this physical playing, rather than dictate it. Nelson, Dahl, and Podgurski place individual expression in the back seat in favor of a cohesive vision that relies as much on mood and aura as it does technical chops. Recorded live to two inch tape at Seizures Palace in Brooklyn, the cavernous quality of the recording and signature mastering from Weasel Walter augment an undercurrent of grit and dread. Overall, the album has an essence of eternal void, as if the music exists in a vacuum of space that could go on infinitely in either direction. GRID’s debut is merely four glimpses into this alternate dimension of sound.