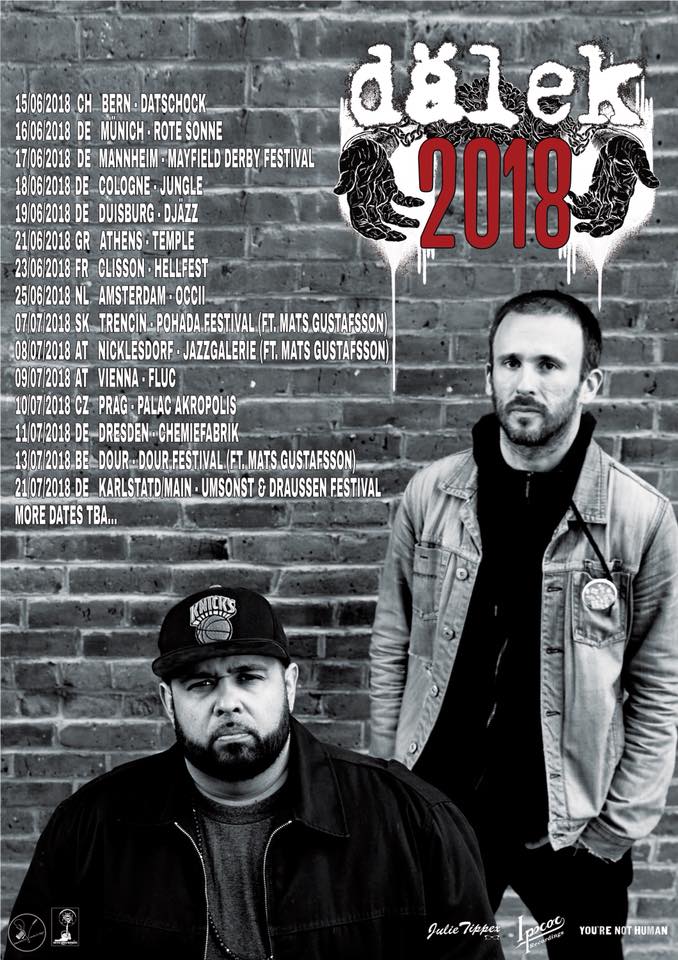 Veteran agitators Dälek have never been ones to stick within the rigid parameters of genre. A group who seemingly hold the utmost contempt for conservative expectations regarding form, instead pioneering a volatile and timeless strain of hip-hop, drawing as much from My Bloody Valentine as Public Enemy. These practitioners of noise fuelled depravity are back with a whole new album, entitled Endangered Philosophies, their follow up to last years Asphalt for Eden, scheduled to come out via Ipecac Recordings September 1 2017.

With Dälek, the flow has often been usurped by scorched textures, the product of synthetic decay, themes flitting from pungent political rage through to outright Dionysian frenzy. On Endangered Philosophies, the lyrics are more focused and at the forefront than ever before, and MC Dälek’s new experiments with rhyme styles and flow makes for a vital concoction. There’s no doubt about it, Endangered Philosophies is a work of guttural catharsis, it is a call to arms…

Within the context of the current political landscape, the title Endangered Philosophies certainly brings to mind pertinent issues of moment, notably the rampant rise of anti-intellectualism, as well as the all too rapid erosion of genuinely progressive values in the face of fearful reactionary forces. In MC Dälek’s own words…“Endangered Philosophies is a very introspective record about very external forces. This isn’t about one listen… it’s about your evolving perception when you immerse yourself in the layers of sound and words. Endangered Philosophies is a record about the RIGHT NOW and yet will resonate differently each time it is listened to, in a word….timeless.” (Rolling Stone)

Dälek have been prone to outbursts of pummeling extremity, yet their sound is anything but one dimensional; with viscous dark-ambient soundscapes congealing atop their incessant beats, a dual focus on brute force and disembodied unease. And still, Dälek continue to evolve, as Endangered Philosophies takes a new approach to source material, this time making use of material sent to them by people they have friendships and relationships with including Toronto based Metz, manipulating and sampling in the same way they would use record samples.

Although the group have evolved their sound over the years, they continue to collaborate with the same behind the scenes crew who’ve been with them from the beginning, from the production team, to the artist behind the cover art (Paul Romano). Endangered Philosophies captures so many elements of past Dälek but in a new way, easily matching any of their earlier output in terms of sheer unbridled intensity.

At this stage in their career they have elevated to a frankly peerless stature; with next year marking 20 years since the release of their pivotal debut album Negro Necro Nekros, and having previously collaborated with a host of like-minded visionaries; ranging from Krautrock legends Faust, through to the 90s electronic act Techno Animal – a similarly restless project comprised of Kevin Martin (The Bug, King Midas Sound) and Justin Broadrick (Godflesh, Jesu). Fans will be thrilled – but not too surprised – to discover that with Endangered Philosophies, the group once again charge forward, continuing to resist stagnation in all of its forms.

DÄLEK, MoE
Bookings are closed for this event. No tickets will be sold at the door
Posted in Featured, MKM!