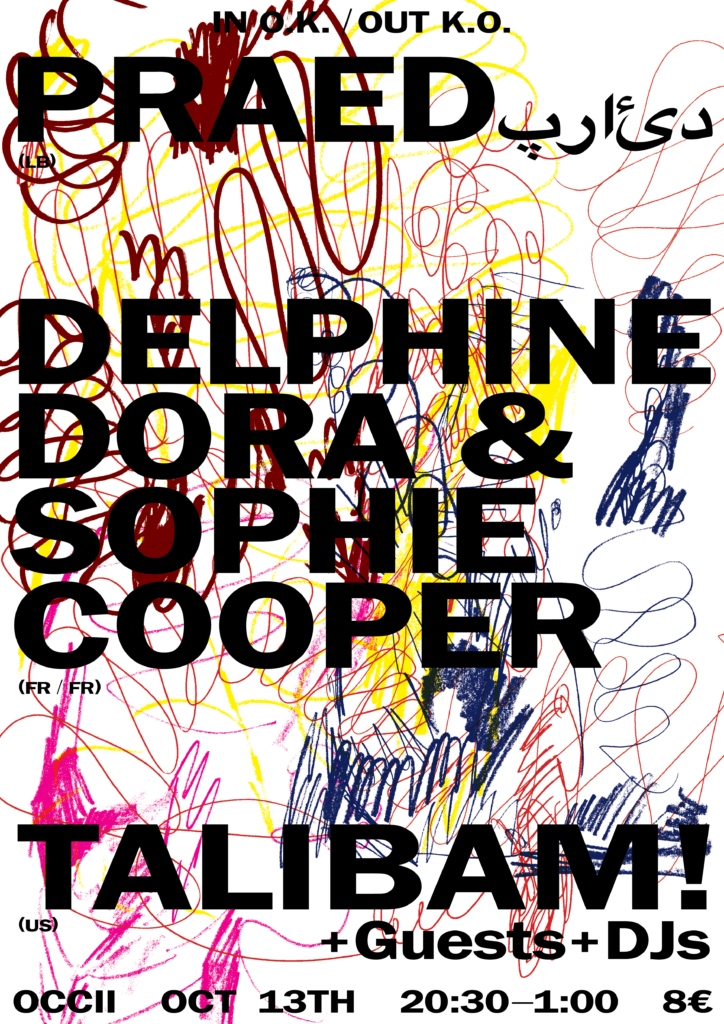 Founded by Raed Yassin and Paed Conca in 2006, “Praed” is a band whose musical oeuvre can be described as a mixture of Arabic popular music, free jazz, and electronics. In the same year, the band made its first public appearance in Al Maslakh festival in Switzerland, immediately followed by a concert at the Irtijal festival in Beirut. Since then, the band has frequented numerous international music festivals and toured intensively world-wide, spanning Japan, Europe and Canada. Through these endeavors, the band has created a large global network with other renowned musicians as musical collaborators. The band consists of two regular members: Raed Yassin playing keyboards, laptop, electronics and vocals; and Paed Conca on clarinet, electric bass, and electronics. PRAED performs also under the name PRAED PLUS as a big band together with Axel Dörner, Johannes Bauer, Hans Koch and Stephane Rives. The band’s body of work mainly explores the terrain of Arabic popular music (“Shaabi”) and its interconnectedness with other psychedelic and hypnotic musical genres in the world, such as free jazz, space jazz, and psychedelic rock among others. Since its inception, Praed has shown a very keen interest in this music as a medium that reflects Egyptian society’s complicated fabric. Through the research it conducted, the band began to discover a strong cultural connection between “Shaabi” sounds and the “Mouled” music that is played in religious trance ceremonies. The hypnotizing psychedelic effect that was embedded in this genre also triggered thoughts around its similarity to other popular music in the world that employ forms of sonic delirium, such as free jazz and psychedelic rock.

PRAED will release their new album “doomsday survival kit” on AKUPHONE in January 2019 as vinyl, CD and digital download. Launched in 2015, AKUPHONE is a French record label based in Paris. Created by Fabrice Géry (aka Cheb Gero), this independent name is dedicated essentially to rare global Pop & Folk Music. From the 1940’s to the 90’s, from 78-rpm microgroove to cassette tapes, Akuphone handles the whole range of audio broadcasting formats. Akuphone’s productions are limited editions that range from new extended releases of vinyl records to creating original best of albums of artists and thematic compilations, as well as productions of today’s artists. The catalogue is available in vinyl, CD, as well as digital formats. Each project starts with the restoration of original sound recordings and sleeves, to which a thorough documenting work is added: lyrics transcription and translation, research on the artist’s biography as well as the historical and political context of the original release. Fabrice Géry, founder of the label, is a music enthusiast and collector, who worked as a record dealer for many years. He launched Akuphone in an “archiving” spirit, drawn by a desire to “explore the world through music”. In an archaeology-like approach, his goal is to put into the limelight the work of artists – musicians and singers – unknown to the general public or fallen into oblivion in the so-called “Western countries”. Far from supporting a romantic or fetishist vision of extra-Western music, the label aims at linking these productions to their historical and political contexts, placing them back in the social and cultural conditions in which they emerged. Motivated by this project, Martin Jay joined the label to contribute to its development.

One minute excerpt from our new song “Doomsday Survival Kit” coming soon on an Album at Akuphone!
from a concert at Metro Al Madina in Beirut last July
https://www.youtube.com/watch?v=U9JxcBmyWSg

Delphine Dora & Sophie Cooper
Ecstatic Sound-trips
Sophie and Delphine have embarked on an ongoing improvisational project together exploring sonic possibilities between their primary instruments of trombone, piano, organ, voice and electronics. Cooper and Doras improvisational approach to making music has come from a shared interest in exploration of the unknown. The music produced is without restraints and sits somewhere between contemporary classical and experimental drone music.

As well as instrument playing, the duo have a strong interest in the human voice and possibilities of non-verbal communication, negotiating space between them and thinking about musical “call and response”. They see improvisation as a method of rejecting standard musical practices and the inclusion of electronic processes in their work creates a fresh way to present traditional brass instruments and accompaniment standards.
The collaboration between two women is also a crucial element of the duos ethos. In each other they find inspiration, spur each other on to be creative and hope to motivate other women to work with sound. With Brexit on the horizon they also see a collaboration between the UK and France as an important statement of solidarity and a rejection of this event.

Their first album Distance Future, released on the Was Ist Das? label, featured in both Pitchfork and The Quietus 2015 end of year lists. Their third album Divine Ekstasys has just been released on American label Feeding Tube Records. Listen to this great and unusual review of Divine Ekstasys by Ned Netherwood, including fragments from the album:

Talibam! (NYC, ESP-Disk)
are Dadaist provocateurs with an innate love for the history of music (featuring Matt Mottel and Kevin Shea).
Diversifying Sonics Since 2003.

Talibam!, a 14-year working unit based in New York City, can be described in various ways — as a classic keyboards/drums expanded-jazz duo, as Dadaist provocateurs with an innate love for the history of music, as a Fluxus-informed theater troupe, as an electronic ensemble inspired by Stockhausen, or as a rhythm section at the cross hair of agility, speed, punctuation, and intention. Since their inception in 2003, Talibam!’s ultimate goal has been to wed disparate ideologies through proficiency, controversy, inquiry, and compassion. Matt Mottel (keys) and Kevin Shea (drums) have remained devoted to their belief that the application of diversity in sound is paramount to the appreciation of diversity among fellow beings. Talibam! delights in creating music that cannot be pinned down within the safe-spaces of existing genres. With each new album, Talibam! reinvents their methodological palette in order to bolster a fresh clarity of joyous auditory surprise, something their fans have come to depend on. Talibam! has worked hard to proselytize their process.

In 2012/2013, Talibam! collaborated with legendary Fluxist artist Yasunao Tone at the MoMA, completed 3 theater residencies in NYC — at the IRT Theater, the Lower Manhattan Cultural Council’s Swing Space, and at the Incubator Arts Project where they presented their opera Discover Atlantass with collaborator Sam Kulik (http://bellykids.bandcamp.com/album/discover-atlantass) — released 3 albums, completed 6 European tours, collaborated with world-renowned choreographer Karole Armitage, performed at ATP by invitation from TV On The Radio, performed at the Sant’Anna Arresi Jazz Festival in Sardinia, etc.

Their 2012 release, Puff Up The Volume, was a bold attempt at rap without having ever practiced or listened to rap before (https://itunes.apple.com/us/album/puff-up-the-volume/id565932071). In 2014 they released Polyp, an improv CD about the adolescent qualities of no-wave music with Weasel Walter (http://mnoad.bandcamp.com/album/polyp). 2015 has seen the release of 4 albums and a comp track: Free World is a sound collage cassette extracted from their Launch Pad series (https://korperleib.bandcamp.com/album/free-world), Double Automatism is an electronic/noise 180gram vinyl with Yasunao Tone and Sam Kulik (http://karlrecords.bandcamp.com/album/double-automatism), Translition 2 Siriusness is an electronic/dance-ish white LP with QR code (http://talibam.bandcamp.com/album/translition-2-siriusness-side-a), The Marimba Files is a tour-only CD extracted from their Launch Pad Series — and finally Talibam! added their track Aufhebong to an Icelandic-based cassette comp (http://ladyboyrecords.bandcamp.com/album/lady-boy-records-009).

To date, Talibam! has traveled to over 40 countries, completed more than 30 international tours, and released over 40 albums.

Currently Talibam! has many albums in production and has released over 50 videos on their YouTube channel:
http://www.youtube.com/playlist?list=PLGXv0p_jhXwC93O2F4IpAt6TQSY-FF1Bf

Talibam! has been producing a Launchpad “cultural improvement” series which you are encouraged to explore here:
http://talibam.bandcamp.com/album/talibam-launch-pad-2-frank-ocean