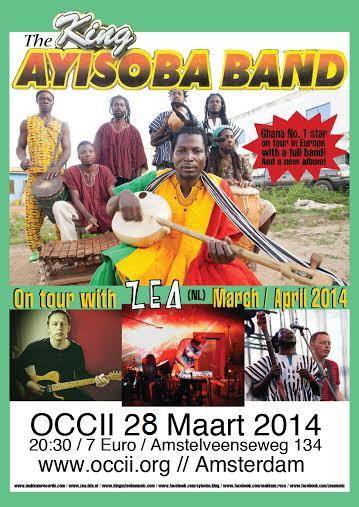 This is the traditional kologo music from the Upper East Region of Ghana brought with the energy and flavor of the twenty first century. King Ayisoba sings in Frafra, Twi and in English and is a big star in Ghana. There is a whole new scene now starting after King Ayisoba introduced the super catchy kologo beats to the bigger audiences in Ghana and abroad. The kologo is a two string guitar with a calabash gourd resonator, it is rhythmic and melodic at the same time. The King is bringing other musicians and dancers on this tour, dancing the traditional Frafra dia and kologo dances from the area of Bongo in Northern Ghana. The dance consists of very high jumbs and originates from hunting rituals. Aboku Adortanga (dancer and dorgo player) is King Ayisoba’s brother and is a master in playing the “Dorgo”, a special horn from Northern Ghana used in the traditional Frafra tradition of music. The sound resembles a lamb calling out loud and was original used by the Frafra people in the forest to gather the village people to come and hunt. Gemeka is an absolute master in playing the guluku, a local drum from Bolgatanga Soko in Northern Ghana. Since a few years the young Dagaati has been part of King Ayisoba’s band. At first he came to the concerts and kept coming and telling Ayisoba he could play Ayisoba’s songs on his xylophone. This is not normal since Dagaati comes from the Dagaati region which is upper west in Ghana. But the addition of the xylophone to the kologo, drums and voice works fantastic and Dagaati became a core musician of King Ayisoba’s band and it is already hard to imagine how the band sounded without this very talented young man. 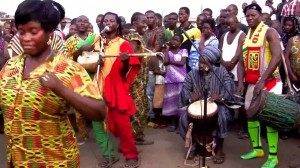 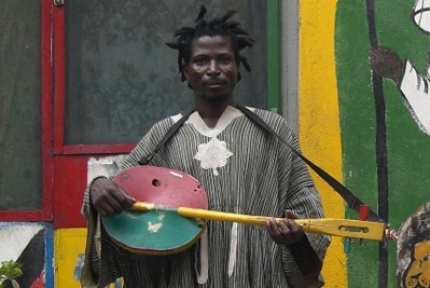 Traditionaly kologo performances occur at local pito bars, weddings, funerals, festivals or spontaneous jams on the street. Today we will see the force and spirit here, around the corner, learn wise lessons and dig up the future.

King Ayisoba is presenting a new album on this tour released on Zea’s Makkum Records!

2014. Zea is just back from Ghana where he played and recorded with King Ayisoba. The new King Ayisoba album is on its way, just like the new split 7inch of Zea and Oscar Jan Hoogland is almost in the shops and on the night of March 28 ZEA will launch his new full length album at OCCII.

“Zea music is direct music. Some songs are about consciousness and some songs are about simple things; Zea can take a subject out of the world of encyclopedia and move it into the musical mind. His tracks are elastic, always playful; this is folk music from the future.” 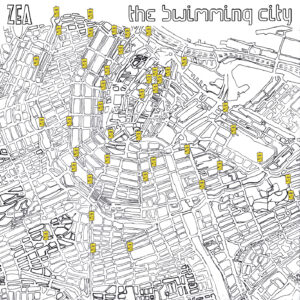 electric clavichord has a new split 7inch out with Zea! and plays this together live on stage…
http://zeamusic.bandcamp.com/track/oscar-jan-hoogland-electric-clavichord