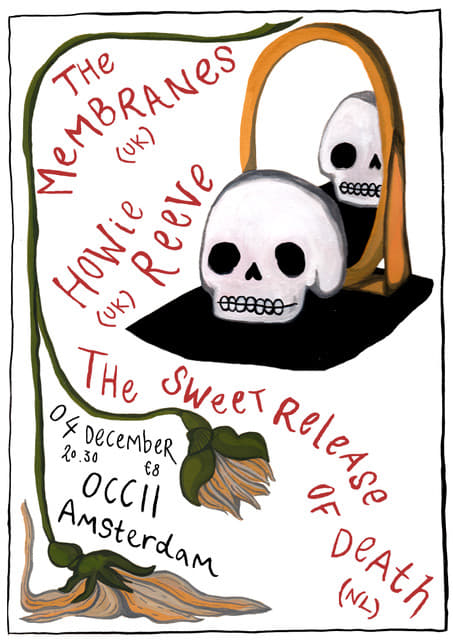 Formed in 1977 by three teenagers from Blackpool in the UK, The Membranes became one of the key influential UK undergound post bands in the early eighties. With bass driven noise records they redefined the genre and were supported by John Peel and the music press and toured the world influencing the likes of Big Black, Mark Lanegan, Mercury Rev, Beck, Sonic Youth, the Wedding Present and many others.

Built around music writer and well known UK face, John Robb, the band are famous for their intense live shows and idiosyncratic vision. The band stopped in 1990 but reformed in 2009 and their two new albums 2016’s ‘Dark Matter/Dark Energy’ and 2019’s ‘What Nature Gives…Nature Takes Away’ have been acclaimed by reviewers worldwide.

The current album also features their 20 piece choir and is a further adventure into their bricolage of sound that is bass driven post punk, epic choir driven soundscapes, dark energy strings and spoken word pieces from many guests.

The Sweet Release of Death [NL]

The Sweet Release Of Death’s third album The Blissful Joy Of Living could be considered a playful counter statement to their own name. Over the span of six songs, it offers an acute glimpse of a band mired in total disarray, struggling to progress from the freewheeling recording methods that fueled their acclaimed self-titled predecessor. The Blissful Joy Of Living’s punctual makeup, clocking in at just 19 minutes and 28 seconds, is an honest symptom of three individuals driving their creative limits to the point of absolute exhaustion.

Overall, The Blissful Joy Of Living offers a more textural, gritty listening experience than the previous two LPs. Instead of embodying the spectral presence of previous recordings, Bretón Ferrer’s bruised squalls on ‘Hey’ are every bit the match for Tevel’s slivered and abrasive guitar pounces. The panic-ridden ‘Ponytail’ and the caustic gaze of ‘Orange Blanket’ see The Sweet Release Of Death frantically reaching for their core instincts, in all-out survival mode. Perhaps for the first time, the brimming energy of their live shows, with Engelsman’s propellent playing cut completely loose, is captured in the recording sessions.

From the volcanic cascades of ‘Sick Girl’ to the majestic jet-engine surge of ‘Sway’, The Sweet Release Of Death prove that even at their most unhinged, the singular chemistry they’ve built, the trio scrambles moods like vitriol, bliss, hysteria and comedy in refreshing new contexts. The album bookends with a glimpse of a new, more abstract direction with ‘The Weather Is Great Today’, an organism that propels itself with gyrating drum computers and buzzing guitar drones. A fitting closing cut, given The Sweet Release Of Death’s willingness to exhume the darkest thresholds of humanity to find respite.

“Howie Reeve is a unique and singular figure in the current British underground. Having spent over 20 years playing in a number of key Glasgow bands, since 2012 he has been performing solo on acoustic bass guitar, delivering a fragmented and dexterous music that takes in post-punk, avant-folk and free jazz. Increasingly turning to songwriting, he further engages audiences with cryptic, intimate and unsettling lyrics. Resolutely DIY in his approach to music, he lives in Glasgow but appears to be perpetually on tour, whether in the UK, Europe or Japan.”

HOWIE REEVE, THE MEMBRANES, THE SWEET RELEASE OF DEATH
NO PRESALE, TICKETS AT THE DOOR, CAPACITY 250, CASH ONLY AT VENUE
Posted in Featured, IN O.K./OUT K.O.